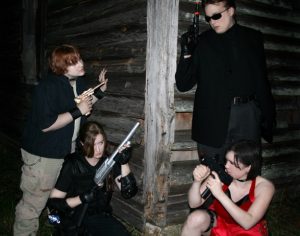 Most of this costume was purchased from various thrift stores and army surplus stores. The ‘jacket’ was then stenciled and spray-painted on the back with the Rockfort Prison design. The collar was made from a strip of pleather, a rectangle of plastic cut from a CD case painted on the back and some papier maché for the border. The wrist cuffs were also made of pleather.

The following year, better boots were purchased and I began working on my own set of Ashford Gold Lugars. They did not get finished in time for the AWA ’07, however.

Before Metrocon ’08, the ‘jacket’ was redone with a slightly stiffer thrifted shirt and the design was painted on for better coverage and detail. The official Ashford Gold Lugars were purchased sometime the previous year and used in place of the prop Lugars. A red thrifted wig was also put into use for the final wear.