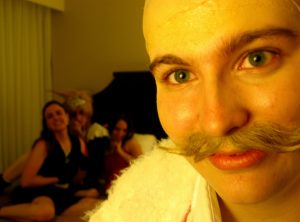 Originally, coat was a pink dress purchased from a thrift store. It was cut up the front and that was all, since it was meant as a joke costume. I made a fat suit out of thin beige fabric and polyfill, then purchased 40W jeans and a 4XL button-down shirt to fit over it. The ensemble was completed with a bald cap and a cheap blonde wig that was braided into pigtails, allowing it to be draped around the neck of any Cloud cosplayer to instantly transform them into ‘Miss Cloud’.

This costume received a few updates over the years, including the addition of fur trim on the lapels and a lace moustache.