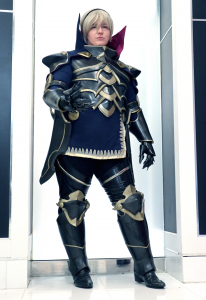 Leo was an instant favorite when we played through FE:F and with Glitz and Skele on the team as Niles and Odin, it was a no-brainer to do the whole trio!

Leo was a very ambitious costume that required me to learn, fail, experiment and struggle with many new concepts and techniques. I had only ever used craft foam in cosplay before, so I had to learn the difference between types and weights of foam. I started with what I thought would be the easiest part, cutting out and assembling the hip guards first.

The kneepads were one of the first trial-and-error roadblocks I faced. The thin foam was easy to work with but didn’t hold shape once bent around my knee. I also  had trouble figuring out how to make the swirly wing shapes that were on each side. I tried different methods of cutting and shaping using a dremel but none were precise or easy enough to encourage me to finish them. Eventually, I decided to remake them in thicker foam with sculpted, molded and cast embellishments.

Before I learned about weights of foam, many of the pieces were made of rigid 4lb EVA foam which was nigh impossible to shape nicely and wear. I replaced the greaves and bracers with 2lb foam after they proved too rigid to curve well and too textured to be comfortable to wear.

Armed with thinner foam, I set about patterning and assembling the breastplate. This was a relatively straighforward process, thankfully, and most of the pieces made sense with little redrafting necessary.

I continued to learn about molding and casting, making any solid, well-defined piece with clay and duplicating it as necessary. I had originally intended to cold-cast all of the brass pieces but in the end I used paint instead, since the two-part mold for the cloak pieces would not match.

At the recommendation of friends, I tried out a wig from Wig Is Fashion for Leo, but found that the wig itself was too sparse and the measurements too small to be flattering on me. I re-ordered a Derek in Light Blonde from Arda Wigs to use instead and was much happier with the results.

For the cloak and tunic, I figured out how to embroider my own lace and trim, piecing it together to match the patterns on the artwork.

As AnimeNEXT approached, I started to cut corners wherever possible to allow us to wear our costumes unfinished. This included using a previously abandoned technique to create the swirled embellishments for the elbow pads. The knees and thigh pieces needed to be remade at the last minute due to incompatibility and damage during fitting.

At AnimeNEXT, I applied the lace and assembled the tunic. Unfortunately, the friend that I enlisted to help me with the cutting was not as precise or careful as I needed for everything to match up, and the tunic was misshapen and unflattering as a result. I also had to make last minute foam replacements for the cloak clasps in order to wear the costume. I was able to wear most of it on Sunday for a while with Skele wearing part of their Odin cosplay with me.

After the disappointing debut at AnimeNEXT, I set out to improve Leo. This included redrafting the tunic and replacing the thigh armor, first and foremost. The thigh armor was remade using metallic black and antique gold spandex. Due to the lack of material to completely redo the tunic, there are still problems with the fit, however overall I am satisfied with it. The lining was made from one of my mother’s old bridesmaid gowns, so it has some amount of sentimentality to it that makes up for a sub-par fit.

The claw armour was made using craft foam and Worbla, which ended up being very durable but had some major fit issues that rendered my hands almost unusable once a glove was added beneath them.

I attempted to make a last-minute  Brynhildr to complete the ensemble but the chill of our house made our Plasti-Dip too thick and the spattery spray welded the foam to the cardboard when we attempted to coat it. We learned a lot of valuable lessons about Plasti-Dip, but sadly not in time to have a Brynhildr for the con!

Katsucon was the first proper showing of the costume, though it proved a bit fragile to wear for too long. We had a few minor malfunctions that will be fixed before the next convention wear!

After Katsucon, I got to work sculpting pieces to mold and cast to make a better Brynhildr, using a papier mache book box as a base.