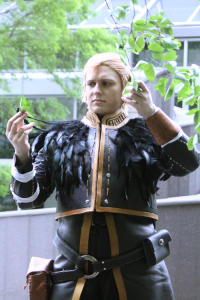 Anders was a project that I never thought I would undertake but had the money to waste on. I’d never done leatherworking before and it was more ambitious than almost all of my previous projects. I had a lot of expensive lessons learned and came through with a much stronger skillset than I previously had.

With the guidance of a friend, I set out to buying everything I would need for making the leather armor. I bought veg-tan for the bolero, since  the easiest way to make the trim was to tool and dye it appropriately and then settled on a chrome-tan black side for the undercoat. Unfortunately, not only was the chrome-tan side too thick and rigid for the undercoat but the sleeves I had intended to make out of it had to be replaced as well. Most of the side has been used as of 2017 but it was definitely an expensive mistake. Both were remade from supple black garment leather.

To attach the feathers to the bolero, I used an awl at an angle to make holes in the leather, mimicking the way birds’ feathers actually grow. Each feather was then had its quill dipped in Shoe Goo and was inserted into the hole. The feathers were a blend of cheap black craft-store feathers for bulk mixed with schlappen and saddle feathers for better aesthetic.

The wig used was from Arda Wigs and was a lace-front wig in light blonde. It was much too long and needed to be trimmed considerably. Additional sideburn pieces were added with lace and the top section needs to be re-styled into a ponytail upon each wear.

The costume was debuted unfinished at Anime Boston ’13 but continuously received updates after that point to bring things closer to finished. The undercoat went through several different stages of applying all of the squares, using glue and rivets before finally being stitched down.

A pair of boots was in the works before the costume was retired for repairs, never getting totally finished. Anders is one of my most worn costumes and has needed the most upkeep as a result. The bolero needs occasional refeathering as the feathers get bent or broken as a result of packing and wear.