We fell in love immediately with these designs and Glitz claimed Xander without hesitation. I didn’t want to be left out, but what was I supposed to do? Let’s face it, I just wasn’t cut out for Camilla. I also don’t have a particular affinity for Chrom or Lucina, so they were also out.

I initially decided to do a version of Leo for myself, using slightly different colors. I sketched it out quickly but never got around to doing it, or Spring Xander for that matter. Both got shelved when we had to put all of our cosplay plans on hold due to financial issues and we didn’t dig them back up until Spring 2018.

Though we’ve still had a rocky money situation, I thought we could squeeze in a cosplay or two for the first half of the cosplay season. I rethought my Leo plans to use the same fabric as Xander, but the price tag seemed out of our range.

That’s when the plans shifted.

While digging around for a few supplies, I stumbled upon a single piece of folded fabric that I couldn’t remember ever getting. It was a piece of blue stretch velvet that had once been a curtain and it was just enough to make a tailcoat from.

Instead of Spring Leo, I was going to be Winter Leo.

The palette swap was cheap, since I had the main materials already in my stash. An ancient bolt of raspberry satin would be the lining, mimicking Leo’s existing palette. I would trade in the gold accents for silver, black for white.

I set about drafting a the pattern on my new mannequin, paying close attention to the back and side seams, which tend to be problem areas. Once satisfied, I then transferred the pattern to my found-material and set about assembling my waistcoat. 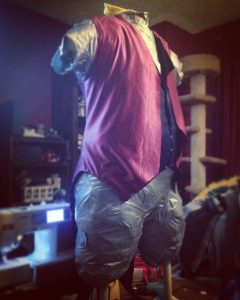 Due to the stretch in the velvet, the pattern pieces didn’t quite line up when it got to the center seam. This was fixed with a quick piece of facing on either side made from the stretch velvet.

Once the waistcoat was drafted and (mostly) assembled, I was able to start all of the trim and embellishment work that I find so cathartic. I used some silver ribbon for the trim and some silver lace as an extra embellishment peeking out from the edge. I thought it really added to the icy aesthetic and helped make the waistcoat look extra fancy. I cut the ribbon in half for the lapel trim as not to completely overwhelm them.

Any awkward misalignments between the lining and shell were tucked away inside the trim, giving it a nice finished look straight away. Using ribbon instead of proper bias tape did make the edges a little less clean than I would’ve liked, but my material choice was, unfortunately, quite limited.

The final piece I worked on tackling was the weird front embellishment. It had a very distinctive trim-layering that was hard to concile with normal trimming techniques. I spent a lot of time working on it, got really frustrated and powered through it, but I’m still not totally sure if I like the result or not. 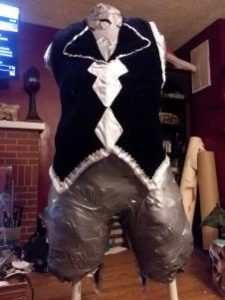 I pinned it in place until I could decide, using some of the excess white satin to make some trim. I was very unhappy with the way the trim turned out, so I will very likely be purchasing some proper bias tape in the future to bind the armscyes with. I have since slowly tacked down all the trimmed edges but did not take any additional photos.

The dread is starting to sink into this piece, so it will be shelved in the short-term while I do other parts of the costume. Next up will be making the shirt, poofy slashed sleeves and all!