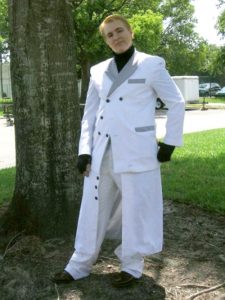 Originally, the white suit and undercoat was purchase through eBay and modified. The undercoat was made of a slightly stretchy, slightly sparkly material and zipped up the front. I hand-stitched grey trim onto the jacket and away I went!

This costume received a complete overhaul in 2007. The original trim was carefully removed along with the buttons, then the jacket was altered to create a more accurate, tailored, double-breasted look. New button holes were created, the buttons re-applied and the trim hand-stitched carefully into place. The undercoat was remade at this time using thick interfacing to better match the original design.

The final update this costume received was a new undercoat made by koyasufan, which is still being used for this costume.