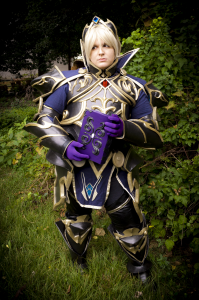 As soon as we promoted Leo in FEW, I knew I had to make his Dark Crusader costume as a follow-up to the Dark Knight costume. With Katsucrunch in full swing, I couldn’t focus much on working on it before the con, but I did concede and make the base for the crown to tide me over.

After Katsucon, it was full speed ahead on the Dark Crusader! I started by pinning some scrap paper to the dummy and sketched out the general shapes I would need for the various layers of the breastplate. I then cut out the rough shapes and pinned them together to judge how to proceed.

Since D.K. Leo’s armor was not easy to travel with, I wanted to make sure that this time around, everything came apart as much as possible. With this in mind, the breastplate pattern ended up being in 7 pieces, secured with magnets and velcro. This had the added benefit of allowing for tighter tailoring as well!

The pauldrons were made from stiff 4lb foam scraps, embellished with 2lb foam scraps. The hip guards were also made with 4lb foam scraps. The greaves and bracers have zippers installed in them to allow for a tighter fit as well as an easier time dressing and undressing. Additional layers will be attached with velcro and/or magnets.