This post originally appeared on the GlitzParty Cosplay tumblr in 2012. It has been preserved for posterity to aid other cosplayers here!

when distressing clothes for cosplay, there are two main points to consider: the colour and the texture of the cloth.  one without the other is not usually sufficient.  if you stain something but it looks otherwise pristine and new, you won’t have the safe affect on the viewer as you would with both.  similarly, you may not end up noticing the physical distressing if the colouration is otherwise really clean.

i’m going to break this into two different parts in separate posts.  any questions can be dropped into my ask and i’ll answering them as i go.

COLOUR:  A PRIMER ON STAINING AND AGING

the main thing you want to consider when you begin staining and aging is what are you trying to replicate?  is it blood?  is it dirt?  is it just age?  what is making your outfit less than new?

when going for something bold, think bold, but also think out of the box.  while some people (hi lady!) have a lot of good experience with certain types of fake blood, i tend to avoid using it on costumes.  in my experience, it tends to remain very sticky and attracts a lot of free particles, and is in general a huge mess.  if you want to go this route, ask lady about what she does and how. 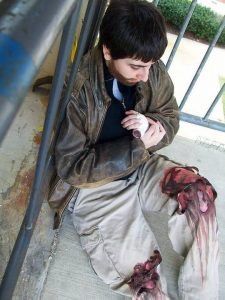 when c did ethan at otakon ‘10, we opted to not use fake blood when ruining his pants.  after distressing them physically, we stained them with marker.  we used prismacolour markers specifically, in the shades of black, dark brown, and crimson red.  we started out by rimming the holes with the black, blended out from there with the brown, and finished up with the red.  where the glass would have cut through the pants and legs, we made it the darkest, getting lighter as it goes.  since ethan was crawling through glass in the game, we made sure to trail down with it to show that motion.  overall, we were very satisfied with the effect.

the downside to using marker is they can bleed when you wash the garment.  we have not as of this posting washed the ethan pants.  due to the compromised structure of the pants themselves, and the potential bleed and ruination of the stains, they would have to be hand washed separate from normal clothes.  prismas are alcohol based markers and can cause serious permanent stains, however they are not completely ‘set’ and always carry the risk of superficial bleeding.  as always, test before you leap in. 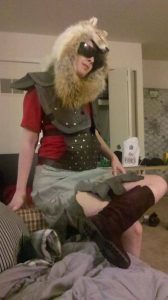 at this point in the vulpes skirt, we had just finished the first round of ink dying to simulate prolonged exposure and dirtying.  we prepared a mixture of water and a few drops of ink in a shallow tupperware, and dipped the ends into it, allowing the stain to travel upward as the wetness spread through the cloth.  this provides a gradient effect within the stain, but leaves a relatively stark border between parts that received the stain and parts that did not.  by carefully wetting the fabric around the stain (a misting bottle works well) you can dilute the ink-to-water ratio near the top and get a smoother transition.  it takes practise, so don’t get too discouraged. 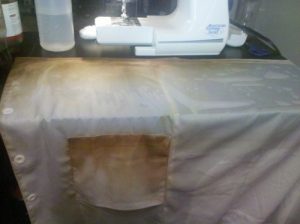 you can use this same sort of technique with other materials, such as instant coffee as seen in the arcade coat here.  by using very little water, you can get a sticky paste from the coffee, which can be carefully applied to certain areas of the coat that you want to be particularly stained and then the rest can be wet to drag the stain out in a gradient.

when using instant coffee, be aware that the water will drag the coffee out the further you spray, so be thrifty when doing so.  if you wet too much, you will lose all the poignancy at the original spot.  the good thing about coffee is that in the relative short-term you can wash out the stains and try again.  this is definitely good when just starting out.  clothes can be baked (pay attention to what they’re made of first, know your fabric and notions) to set the stains a bit better but it’s a much less permanent solution than others. 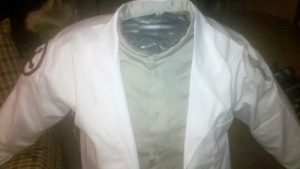 you can also use coffee and strong tea to overall stain a garment to give it a gentle aged look.  in this photo, the arcade coat was shiny and new, but the shirt underneath had been aged with coffee and tea, and baked a few times to set the stains.  it was originally a very light grey colour and now has a faint sepia shade to it.  that, combined with physical distressing, gives the appropriate feeling of age and wear. this shirt has been run through a washing machine with other clothes and still looks just as good.  repeated washings may require re-staining but as the process consists of letting it sit in a bowl/bucket/bathtub of coffee or tea, it’s not really that time or labour intensive.